Six Degrees of Me

Feeling a little silly this morning, so let’s play a game!

I don’t have a ton of celebrity stories; I live a simple life in the middle of a cornfield.
I guess that contributes to my goofy star-struck nature when I do cross paths with ‘stars.’ Here’s one of my favorite stories:

My friend and I were at The Remains Theater closing party in Chicago. We had been big fans of the Remains Theater, 1800 North Clybourn (Goose Island Brewery), attending shows whenever we could. We were pretty disappointed they were closing. There was a decent crowd paying their respects in the bar outside the playhouse, milling, drinking, and chatting.

I saw a guy that looked familiar, but I couldn’t place him. My friend was equally stumped. We made it our own private party game to figure out why we recognized him. We followed him, engaging in conversation with the people he’d just left.* “Hey, we saw you talking to (nod in direction of departing mystery man), what’s he up to now?” When we’d gathered a bit of info, we approached him and chatted like we knew who he was. This is what we had garnered from our stealth stalking; his name was David, he was part of Lookingglass Theater, and he’d just wrapped up a run on NYPD Blue. Come to find out, he was David Schwimmer, the guy who married Kevin’s hippie sister on The Wonder Years (this is where I recognized him from), his character, 4B, had just been murdered on NYPD Blue (where my friend claims to have recollection), and he was wrapping up a new NBC sitcom that he was really excited about called Friends. He was really nice, friendly, talkative. I asked him for a picture and he patted his jacket and apologized for not having any on him. He may have blushed when I held up my camera and reiterated my request. After the show was a solid hit, I sent an 8×10 to the studio (return postage included) recapping this same story and ending with, “Please autograph and return or I may be forced to submit this to the National Enquirer with the headline, I had Ross’ love child!” 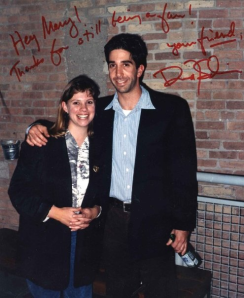 That told, it’s game time!
Using David Schwimmer as the first in my chain of six degrees, let’s see who I reach…

Here are some potentially impressive yet random Hollywood names that were literally the first ones to pop into my head:
1. Elizabeth Taylor
2. Clint Eastwood
3. Bette Midler
4. Molly Ringwald
5. Kristin Stewart

Are you thinking about who YOU are connected to? Keep me in your loop. I know you, so I’m associated with everyone within five degrees of you!
Sure you should be working or exercising or cleaning, but you can multi-task!
Google specifics later. Let me know who you’ve got and who you get to!

*In hindsight, we very well may have spoken to famous people and were too focused to realize!

I am an artist, crafter, designer and writer. I enjoy working with mixed media-- applying visual and tactile manipulations to telling a story. Not a lot of market for that, though, :), so I'm focusing on short story submissions and novel completions. Yes, plural. Lots of beginnings, too many ideas, not enough focus.
View all posts by Mary Fran Says →
This entry was posted in It's all about me and tagged David Schwimmer, friends, Lookingglass, Remains Theater, six degrees. Bookmark the permalink.

6 Responses to Six Degrees of Me