This is one of my favorite stories to tell. Now. For a long time, during and immediately after, I didn’t find the humor in it at all. Despite how the mere thought of it brought my husband to giggles. Seriously, I kid you not. Giggles.

It was spring 2003, I was in my last semester at NIU as a return student. I had completed the Visual Communications requirements and was filling out the last of my gen eds with a feel-good sociology course and Paper-making. At the time, the fiber arts studio was located in a separate facility, across the street from the Art Building. The everybody-get-along-and-have-high-self-esteem class was located on the other side of campus. I wasn’t in the art building at all that semester.

When the art school secretary began a game of phone-tag with me, I was a little concerned that maybe I’d missed a requisite, was a credit shy, or was suffering from some other graduation impediment. As the game continued and we kept missing each other’s calls, I really started to worry. I was so close; I was so ready to be done, oh crap, what’s wrong?!

The day I finally got a hold of her, literally the first words out of my mouth were, “Am I in trouble?”

Literally, her first words in response were, “Well, they’re not going to press charges.”

And thus begins the post-card story.

For my final assignment in my paper-making class, I had decided to pull papers with inclusions and make post cards out of them. I wanted the inclusions to represent specific destinations in the US. I shredded playing cards for Las Vegas, added tobacco for North Carolina, sand for California, oil for Texas, etc. Originally I was just going to print on them, Greetings From…, but then during critique someone suggested I send them to these places and have them post-marked. I loved the idea. I am a sucker for the USPS, and I had friends and family in several of my “greetings from…” locales.

For the cards that I did not have personal addresses for, I looked up post offices on the internet. I wrote a very considerate letter, Dear Friendly Postal Service Provider, included my reason and request, pre-posted and addressed a specific card, and tucked it all neatly into a standard sized envelope. Of the ten cards I sent out, I got six back. Six and a story.

“Well, they’re not going to press charges,” the secretary had said.

Who? The FBI. The FBI? Yes, the Feds. But the good news is they’re not pressing charges.

The agent that called the school was calling to assure my professor that my project had been “inappropriately handled,” and also it “had been destroyed.” The secretary believed he was truly concerned for my grade. And that he was a little irate with the whole situation.

The only thing I can think of is that the postman tore the card when he opened the envelope. I had sealed the paper! It had to have been compromised to have the bits of –think now, what would I have included in paper honoring Boston?
Yes, tea. Bits of brown (Lipton from a bag) tea fell onto the counter.

Remember, this was 2003 and there had just been several Anthrax scares.

So the bits fall, panic ensues, security is called, the post office is shut down, the premises are evacuated, and the workers who came in contact with it are decontaminated in the parking lot. They brought in the Hazardous Materials team. And the Federal Bureau of Investigations.

I was totally freaked out for days, expecting the Men in Black to show up on my doorstep. Meantime, in the art building, no one knew who to ‘blame’ or ‘credit’ for my sudden artistic fame, because I wasn’t a student in the art building. I had a little bit of notoriety, and a teacher who said he wished I was his student.

My project made the display case—on its own merit, not because of Boston.
I made up a t-shirt that said, The Haz-Mat Dog ate my Homework.

But still I was not comfortable with any of it. I love the USPS! I would never intentionally endanger anyone! I hated the idea that they thought I was some aberrant kid who was making some sort of ‘statement’ under the guise of art.

“I am SO sorry,” I tell the caller with the obvious Boston brogue.

“Are you surprised to hear from me?” he asked.

“No, I mean, I provided you with all of my information.” I did! It was all in the nice little note I included with my project. There was no malicious intent!

I forget his name now, he did tell me, but I was in a little state of shock. He started out really pissed. He told me how he had to strip in the parking lot—the very open and public parking lot—to be sprayed down. He told me how much I had cost the city of Boston. He wanted to put me on speaker phone so I could apologize to the whole room. I could hear voices in the background, “leave her alone,” they said. He was angry and wanted me to know it. I think he thought I’d be some punk-ass college student who would get defensive or self-righteous, but I wasn’t. I was really, truly sorry! I must’ve convinced him, because by the end of the conversation he said, “Well, okay then, but don’t do it again.”

Not a problem, sir.

When I told Dave about the call, he giggled. 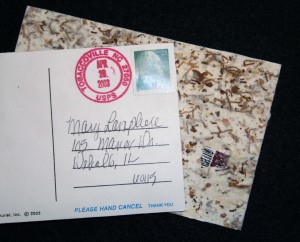 (They didn't have any trouble!) 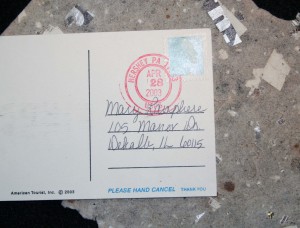 Shredded wrappers and cocoa powder was added to the pulp. 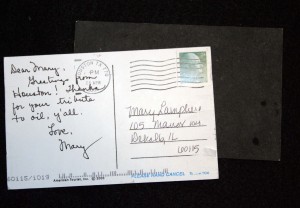 I did not know motor oil was clear. I had to get someone to give me used motor oil so it would be black.

I am an artist, crafter, designer and writer. I enjoy working with mixed media-- applying visual and tactile manipulations to telling a story. Not a lot of market for that, though, :), so I'm focusing on short story submissions and novel completions. Yes, plural. Lots of beginnings, too many ideas, not enough focus.
View all posts by Mary Fran Says →
This entry was posted in Sure it's funny now and tagged Boston, FBI, Haz Mat dog, Post cards. Bookmark the permalink.