Loglines.
Surely you’ve heard of these elusive creatures.
The insidious brainworms that form innocently enough then propagate at the expense of your mental health.

As you know, I’ve been working on submitting my manuscript(s). Submission requires a lot of research– where to send it, who is the right fit, why would they want my novel, as well as considering what about my story will sell?
What happens? What’s important? What’s unique? How can I get the interest of an agent/editor/publisher based on a few choice words?

For those unfamiliar, those few choice words are called a logline. A one sentence description that boils the story down to its essential narrative in as succinct a manner as possible. The logline is the answer to that ever present question, “What’s your book about?”

A logline contains all the elements necessary for the telling of a good story:
1. Protagonist
2. the Goal
3. the Antagonist
4. the Stakes
Each of these elements offers opportunity for me to show what’s unique about my story.

Logline:
Four childhood friends reunite and soon fall into their established stations while raising the stakes of challenging the hierarchy.

Logline:
Four old friends reunite for a day of reminiscing but soon fall into their old competitive ways inciting a crime spree that ends in murder.

No. Not really. Well, maybe.

Their goal?
To pass initiation into the club, er, gang.

Four competitive childhood friends reunite as young adults and commit to a murder pact to pass initiation into an exclusive club where the victim with the most “Pocket Money” wins their murderer the most coveted prize– leadership.

Four old friends who grew up together and then grew apart reunite and start an exclusive club where the initiation is murder.

Four childhood friends who make a murder pact must overcome their own personal demons to see the commitment through to the end before they turn on each other.

Four competitive childhood friends make a pact to each murder one person in an effort to prove themselves worthy of an exclusive club where the winner not only collects the most Pocket Money but also gets to be the boss.

Does this make you want to read my book?

Do you see how hard it is to summarize in one sentence?

Maybe “four friends” is not the protagonist.
Maybe the goal is a social experiment.
Maybe the antagonist is the guilt over what the narrator has already done.
Maybe the stakes are his sanity.

What? That sounds like a whole other book!
Yes, but…

When a psych major plants a seed in the midst of his competitive company to see how it will grow, he becomes part of a murder pact that brings out the worst of his best friends.

When an established loner reunites with old friends, he initiates a murder pact that reveals their flaws and releases their demons.

I could do this all day. 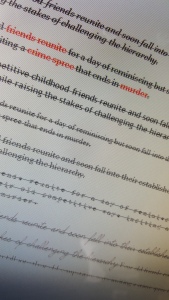 And I probably will…

I am an artist, crafter, designer and writer. I enjoy working with mixed media-- applying visual and tactile manipulations to telling a story. Not a lot of market for that, though, :), so I'm focusing on short story submissions and novel completions. Yes, plural. Lots of beginnings, too many ideas, not enough focus.
View all posts by Mary Fran Says →
This entry was posted in WORD PLAY!, Writing and tagged Lane Shefter Bishop, Loglines, loglines are insidious brainworms, Mary Lamphere, Pocket Money manuscript. Bookmark the permalink.