This blog brought to you by the letter P

An addendum to last week’s blog lends itself perfectly to this week’s letter of the In Print ABC Blog Post Challenge:

My rant about the ass, you, and me of “obviously” stemmed from news coverage I caught the day of the Boston Marathon bombing. Even though at that point in the day very little actual facts were known, a reporter used the word “obviously,” and I thought—HOW COULD YOU POSSIBLY KNOW THAT?! After the horrifying media-mishandling of the Sandy Hook shooting, I couldn’t believe a reporter would be so brazen as to try and sell their conjecture as fact.

It pissed me off.

And lent itself to my perspective.

P is for Perspective

According to Merriam-Webster.com, here are some
Definitions of PERSPECTIVE
1 a : the technique or process of representing on a plane or curved surface the spatial relation of objects as they might appear to the eye 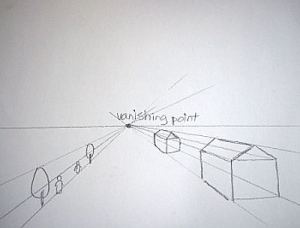 One of my first college art classes was a drawing class where we had to learn spatial illusion. You know, creating three dimensions on a two dimensional plane. Using a vanishing point we had to create depth. Everyone else submitted landscapes—buildings, hallways, mountains. I drew a basketball player. His very large hand extended in the foreground, very far from his tiny head, as he demanded, “Gimme da ball.”

So maybe I got the depth down dimensionally, but mostly I think the drawing reflected a different perspective.  I like to think I brought something new to the table. That I expanded the perspective of the other students.

2 a : the interrelation in which a subject or its parts are mentally viewed <places the issues in proper perspective>; also : point of view

Point. Of. View. A personal interpretation of events. I deal with POV a lot in my writing—what character is doing what, whose head are we in, and how would they know what information the author is providing. It’s tricky when you’re limited to only what the character would know, what they’ve been exposed to– just like real life. If only we were all omniscient narrators.

b : the capacity to view things in their true relations or relative importance <trying to maintain my perspective>

Life experience—you learn what you live– and sometimes what you know isn’t enough to keep things objective. I was already jaded by the media and that experience affected my opinion (and mood and blog). With hindsight, I can identify what adjusted my perspective, add it to my mélange of knowledge and hopefully learn from it.

b : a mental view or prospect <to gain a broader perspective on the international scene — Current Biography>

A basis for comparison. This is why it’s so important to mix it up, read a book out of your genre, visit a place not like home, meet a variety of people, and always be open to learning. Not to discount your own experiences, but it’s good to have something to compare those experiences to.

So now that I’m over my media induced mood, I’d like to amend my opinion of “obviously.” It’s not so bad, really, and when it comes up in conversation, I hope it’s with a tone of sharing and inclusion.

Most importantly, don’t let your perspective limit you.

I am an artist, crafter, designer and writer. I enjoy working with mixed media-- applying visual and tactile manipulations to telling a story. Not a lot of market for that, though, :), so I'm focusing on short story submissions and novel completions. Yes, plural. Lots of beginnings, too many ideas, not enough focus.
View all posts by Mary Fran Says →
This entry was posted in It's all about me, WORD PLAY!, Writing and tagged Mary Lamphere, opinion, perspective, point of view, POV. Bookmark the permalink.