In the Presence of Kings

When Anderson Bookshop announced at the end of June, that authors Stephen King and Owen King would be making a stop in Naperville on September 29, I put the time and date of ticket release on my phone calendar. There was NO way I was missing this event! 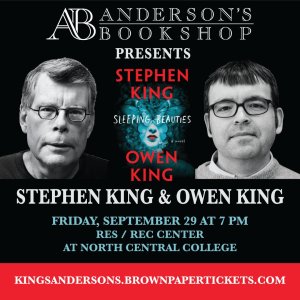 Like many of you, I grew up reading Stephen King.

Carrie, his first publication, was released in Spring of 1974. I was five years old at the time, and although an early reader, I hadn’t yet graduated from Disney books.

Yes, I could read at 5. My mom was a reading teacher.

King would come later…Middle school? 7th grade, I think. I know I had slipped some King in between my John Saul and V. C. Andrews novels before watching the terrifying mini-series of Salem’s Lot on tv starring David Soul in 1979. I still hate vampires, thank you very  much.

He had a lot of books…I read them all. Thankfully, I had easy access as they were readily available in my home. But it’s The Stand that I remember best. That’s the book that truly put me on a literary path. It’s the only book of it’s length that I have read repeatedly.

The morning the tickets went on sale, I was ready. The page was cued up and I was refreshing every few seconds. I swear to you, I HAD to be the first person to purchase tickets. I was petrified that this event would sell out without me. When I easily made the online purchase, I was ecstatic. OMG, so high. I walked on clouds and giggled all day long. I didn’t tell anyone I’d gotten through, I wanted to keep it to myself a while longer.

A week later, when tickets were STILL available, I didn’t need to tell anyone I was going because we were ALL going.

I have had the pleasure of seeing authors Lee Child, Jim Butcher, John Green, Michael Connelly, and Neil Gaiman in person. Big names. Moderate venues. Sold out.
EVERY SINGLE PERSON AT EVERY PREVIOUS GIG WOULD NOT BE AS MANY AS IN ATTENDANCE AT THE KINGS’ EVENT AT NORTH CENTRAL COLLEGE.

Watch this video for proof. And please note, we are not in the clip. We sat on bleachers at the very back of the room which are not shown in the video. I heard it SOLD OUT, I heard tickets were still available the day of.

None of that matters. I saw Stephen King live.

Stephen and Owen were promoting their new release, Sleeping Beauties, which we received as part of our ticket price. It was a quick hour of banter, book talk, and Q&A. They were funny, informative, and insightful. It was everything I’d hoped it would be (except for the crowd).

Each of the other authors that I’ve seen signed their books. Either in advance or in a line before or after the event. The Kings did not. They did, however, sign a few, at random, to be mixed in and handed out upon exiting.  Upwards of 2500 people, easily 1500 books. (Students were free to attend but did not receive a book.)

No one got a signed book.*

HOW FRICKIN’ AWESOME IS THAT?!
He was so cool about it, flashing us the title page with those two names scrawled on it.

Needless to say, I am ecstatic, OMG, so high.
A CONTACT HIGH, but I’m still floating.

This was a very cool experience. Stephen King’s work was a formative element to my life. I am so happy to have seen this literary royalty in person. Thank you to Anderson Bookshop, North Central College, and the Kings for this bucket wish opportunity.

*No one got a signed book, other than Dave, that I know of.

2 Responses to In the Presence of Kings