I recently published a novella titled, Kinder Garden, through the Mary O’Reilly Paranormal Mysteries World. My friend and fellow author, Christine Cacciatore, encouraged me to submit. She was one of the six original authors that launched the Mary O’Reilly Kindle World, just one of many worlds you can write in–including Wayward Pines, The Vampire Diaries, and even the world of Kurt Vonnegut. Below is a blog that Chris posted describing what Kindle Worlds is and how it works. She was kind enough to let me repost it here.

What is Kindle Worlds, anyway?
by Christine Cacciatore

My writing group, the In Print Professional Writer’s Organization, had a guest speaker named Terri Reid in the Spring of 2011.

Six years later, Terri is a best-selling author and not only has finished Book 19 of that series; she’s also written several other series and has fans around the world.

Because her books were selling so well, Amazon approached Terri with the idea to create a Mary O’Reilly Paranormal Mystery World. She needed to assemble several authors for her end of June 2016 launch.

“The other cool thing about this is that if an author has an established character in their own series – they can “visit” the Mary O’Reilly World and interact with Mary – but get publicity for their own character and book.”

To be honest with you, I could not say yes FAST ENOUGH.

WHAT IS KINDLE WORLDS?

Kindle Worlds is Amazon’s answer to fan fiction.  Directly from their website:

“Welcome to Kindle Worlds, a place for you to publish fan fiction inspired by popular books, shows, movies, comics, music, and games. With Kindle Worlds, you can write new stories based on featured Worlds, engage an audience of readers, and earn royalties.”

Before we started on our books, Terri sent us a character bible, describing the characters in her books that we could use. We were also told that if we wanted to, we could bring a character or two from one of our own books into the Mary O’Reilly Kindle World book that we were writing.

The nuts and bolts of it? Write a book over 10,000 words set in the Mary O’Reilly world. Add much or as little of Terri’s character (s) as you wish. Your book should be properly edited, proofread, and formatted. You will also need a cover for your book using the Kindle Worlds template found on their website. Kindle Worlds also puts a copyright page in for you, and prices your book, generally $1.99. Then writers use the self-publishing tool on Kindle World’s website and upload it. It’s extremely user friendly.

For the launch of the Mary O’Reilly Kindle Worlds, we all had to have our books ready and submitted to Kindle Worlds so they could go live on June 30 of 2016.

The day for the launch came. It was so thrilling. Six authors had brand new Mary O’Reilly World books to bring forth—a world where fans of the series were practically salivating to get their hands on books that featured her characters.

The following are links to the Mary O’Reilly Kindle Worlds books. Click on the name to be taken to their Amazon author page!

Chris gets a cover photo because it’s her blog!

Vicky Holt wrote Safety Measures in 2016 and Missing Links in 2017, last month. Vicky says, “For the process of writing for it, that part is easy. Simple to upload and quick review process. It’s nice to see my work getting more exposure than it would, thanks to Terri’s awesome success. That’s probably the biggest perk.” Vicky also points out, “As far as I can tell, no extra marketing going on. I even find it difficult to find Kindle Worlds in a basic search. “

Jan Hinds wrote Widow Maker, (Otherwise Engaged Book 3) in 2016. Jan writes, “It was a wonderful experience and I took the opportunity to overlap some of my characters with Terri’s. I have gained several new readers in the process and am thrilled to meet all of you. Having been a fan of the Mary O’Reilly series I thoroughly enjoyed working with her characters. I can’t say enough about how grateful I am to Terri for enabling me to join this group and let my imagination mingle with Mary and her friends.”

Ophelia Julien wrote A Scattering of Bones in 2016. Ophelia writes, “Writing a story based on Terri’s characters and then having it go up for sale was an amazing experience. I loved being a part of it, and also meeting all of you in the process!  I think there needs to be a lot of clarification on exactly what KW is. I have a review on mine that complains about me writing a story using someone else’s characters, and notes that if I have a story to tell, I should just write my own work and stop using someone else’s. Terri very nicely got on and addressed this, explaining in detail exactly what KW was and why all these people were suddenly writing Mary O’Reilly stories, and with her permission. But there are still folks who seem to have a problem with the concept and don’t quite seem to grasp the underlying intent of a KW story.”

Donnie Light wrote Tangled Trail in 2016 and True Song in December 2016. Donnie’s books are doing very well, and although I did reach out to him for a comment, I don’t think he’s on Facebook a great deal—probably busy writing!

Maureen Tan wrote Hair of the Dog in 2016. Maureen says, “I’d say my overall experience was good…fairly straightforward paperwork, publishing interface, and prompt payment of royalties.  Oh, and I got to meet all of you, which was FABULOUS! Zero support, as far as I can tell, from Amazon on publicizing the books, so that was a little disappointing, mostly because it seemed like they were going to be more aggressive about it.  I guess my biggest frustration with it was readers who didn’t understand the concept of Worlds–back to Amazon/Kindle Worlds maybe needing to do a better job promoting/explaining the concept.”

Mary Lamphere released Kinder Garden last month. She is one of the newest writers of a Mary O’Reilly Kindle World story. Mary says, “I find a lot of people I talk to want to dismiss it as “fanfic”. There’s a lot of terrific fan fiction out there, but the ONE people know is 50 Shades and that seems to be what they want to compare my work to. I figure those people will be disappointed either way, right?! My experience with KW has been fine. It’s still early for me, so not much to report. I definitely plan on writing more in the Kindle Worlds!” 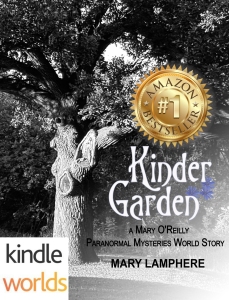 My repost, my cover, lol.

So, what does a Kindle Worlds writer make as a result of writing a KW book? That $1.99 is divided into three parts—a third for the author, a third for Amazon, and a third for the owner of the World you’re writing in.

Terri’s fans are some of the most loyal in existence, and the sales for the first few months our books were out in KW were astounding. Fans of our ownwriting were buying our books, and fans of Terri Reid’s Mary O’Reilly series were thrilled to have books about her character to hold them over until Terri’s next book came out.

That’s the special thing about Terri’s fans—they are absolutely in love with Mary O’Reilly and her now husband, Bradley Alden. They can’t get enough of Mary’s close friends, Stanley and Rosie, and the ghost named Mike, who is their daughter Clarissa’s guardian angel. Her fans read them voraciously the day they are live on Amazon.

My advice to you if you’re a writer looking to gain readership? Go to Kindle Worlds, browse through all the worlds they have to offer, and pick one that interests you. Then get to writing! You have nothing to lose, and only readers to gain.

If you’re a reader? Click on this Kindle Worlds link and immerse yourselves in quality writing in worlds you love. You won’t be sorry, and you’ll meet some superb new authors!

Thank you, Chris, for sharing your insight into Kindle Worlds.

I am an artist, crafter, designer and writer. I enjoy working with mixed media-- applying visual and tactile manipulations to telling a story. Not a lot of market for that, though, :), so I'm focusing on short story submissions and novel completions. Yes, plural. Lots of beginnings, too many ideas, not enough focus.
View all posts by Mary Fran Says →
This entry was posted in Writing and tagged Best seller Kinder Garden, Christine Cacciatore, Grave Injury, Kindle Worlds, Mary Lamphere, Mary O'Reilly Paranormal World Series, Terri Reid, Trouble Lake. Bookmark the permalink.