Twelve by Twelve has become a pretty popular way to reference things– especially in the new year. Twelve months, one goal a month, twelve goals met.

I’ve seen it used by publishers whose goal is to publish twelve great books a year.

It would apply to our Prompt Club, although since we don’t meet in December, we’d be 11×11– one prompt a month times eleven months is a decent cache of short stories for the year.

I’ve also seen it used as a goal for readers, checking off a list of recommended reading one challenging book a month for twelve months.

It seems like a great way to tackle a huge project. When you break it down into bite-sized chunks, the potentially overwhelming project becomes manageable– the mini goals create a path to completing a big goal.

Last year my big goal was Word of Art and although I didn’t label it 12×12, or rather 9×9 since the project was announced in January and the reception held in September, I did create a month by month breakdown, an attainable to-do list. And it worked!*

This year I’d like to tackle publication. For reals.
I have the potential, heck, I have the drafts, I just need the to-do!

Today I’m going to create a timeline.
Based on research and references, and more importantly, friends’ experiences and successes, I hope to plan my year month by month, ticking off relevant steps until I reach completion.

Creating the timeline is a partial first goal, trust me when I say, that’ll be the easy part.
The check mark for January will come with the commitment.
The commitment will come when I press “publish” for today’s blog.
Once I’ve shared this goal with my reading public, once it’s on the internet– and the internet never lies, right– I’m accountable. 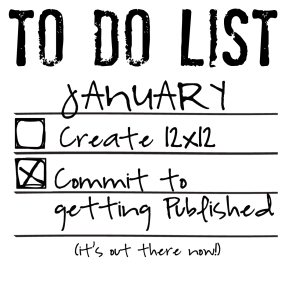 You know there will be adventures down this road.
And you know I plan on sharing every bridge and dip and speed bump.

*Look for the Word of Art 2.0 announcement soon!

I am an artist, crafter, designer and writer. I enjoy working with mixed media-- applying visual and tactile manipulations to telling a story. Not a lot of market for that, though, :), so I'm focusing on short story submissions and novel completions. Yes, plural. Lots of beginnings, too many ideas, not enough focus.
View all posts by Mary Fran Says →
This entry was posted in It's all about me, Uncategorized, Writing and tagged 12x12, Birth that Book, Carpe Diem, CWA BOTY Awards, Illinois Book of the Year, Kelly Epperson Simmons, Kristin Oakley, Mary Lamphere, The Life and Times of Poopwa Foley, the Prompt Club, twelve by twelve, Will be published this year, Word of Art 2.0. Bookmark the permalink.