My favorite times of the year are:
My Birthday Week*
Holiday Season**
Back to School Time***

*Admittedly, sometimes I get longer than a week.
**I’m not being politically correct, “Holiday Season” is pretty much all-inclusive for me, covering Halloween, Thanksgiving, Christmas, and New Year’s—although truth be told, I’m usually holidayed out by December 31.
***As you can see, I generally celebrate August through January.

Remember when television actually had “seasons”? The three major (only) networks kicked off in August with teasers and previews followed by September premiers. A whole season lasted 27 episodes and ended with May Sweeps and cliffhangers. (Who shot J.R.?!) Then you had a “summer season” of repeats. Don’t watch TV, go outside, it’s summer!

Of course, this was waaaay before competing networks included the likes of SyFy, FXX and Spike TV. Also waaaay before DVR, On Demand and Netflix. And waaay before handheld electronics allowing you to watch outside in summer– and any other time and place. 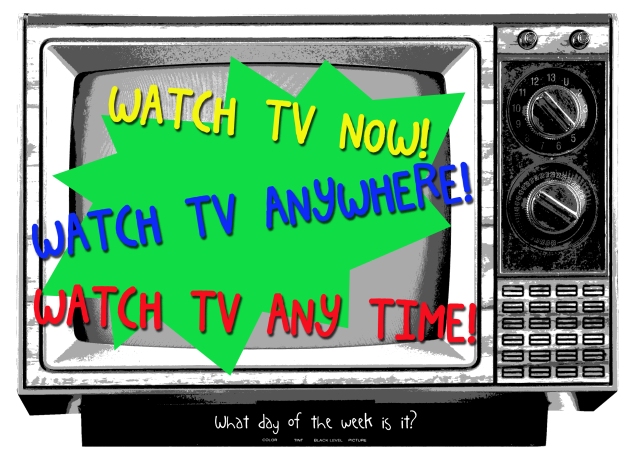 Now, don’t get me wrong, I love the advances in television technology, but still, I wax nostalgic for the days of reliable viewing. I used to know what day of the week it was by what was on. Remember Happy Days, Laverne & Shirley, Three’s Company? Tuesday! Cosby, Family Ties, Cheers? Thursday! Full House, Dinosaurs, Family Matters? Friday! Now we watch everything on DVR, I couldn’t tell you what day of the week- or network- any of my shows are on anymore. Thereby, I can’t tell you the day of the week.

The “fall season” sputters and tumbles into existence anywhere from late July to late October. “Seasons” last barely 12 episodes. There’s no rhyme or reason to the network planning.

That said… TONIGHT begins a whole bunch of shows I want to watch. The Black List is back! (Love me some Red.) The Big Bang Theory is back! (Where in the world is Sheldon Cooper?) Sleepy Hollow is back! (Talk about ending on a cliffhanger—our hero and heroine are trapped in very different and dangerous places, put there by his grown son, Walter Bishop of Fringe.)

Just hope my DVR can keep up considering I won’t be watching any of them in real time.
There’s a Bears game on tonight. Even with all our viewing options, a girl has to have priorities.

I am an artist, crafter, designer and writer. I enjoy working with mixed media-- applying visual and tactile manipulations to telling a story. Not a lot of market for that, though, :), so I'm focusing on short story submissions and novel completions. Yes, plural. Lots of beginnings, too many ideas, not enough focus.
View all posts by Mary Fran Says →
This entry was posted in Holidaze, It's all about me, It's all about You and tagged FYI my birthday is October 8, Holiday Season, Mary Lamphere, politically correct, Spike TV, summer season, The Black List, Walter Bishop. Bookmark the permalink.