The first couple of days were stressful, I was genuinely fearful that Miskey, the momma, wouldn’t make it. When we took the brood in for docking on day 3 and Dr. Dominguez checked her, he said she was looking great. I said “Thank goodness! I was really nervous.” To which he responded, “Me, too.” Seems she was very anemic and took a long time to wake after surgery. I am grateful he didn’t share that information with me at the time.

It’s been ten days and all the pups are doing well–even the scrawny one. She’s still the smallest by far, but she’s strong and feisty and nursing. No eyes are open yet, but soon…

We already have three confirmed to be adopted with several more interested families. It’s happening so fast! I only get eight weeks with these babies, I’m not ready to commit them to others yet, lol.

Trying to get good photos of the individual pups is a tricky thing to do. They sleep in clusters and wiggle when they’re awake! I do have some super cute close-up sleepy puppy shots, though. (And really, that’s the only reason you’re reading this, right? For the photos–) 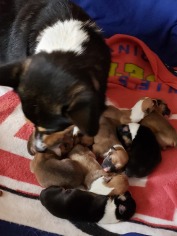 You know I’ll be posting new pics on a regular basis. They change so much in these first few weeks! And they only get cuter. ❤

I am an artist, crafter, designer and writer. I enjoy working with mixed media-- applying visual and tactile manipulations to telling a story. Not a lot of market for that, though, :), so I'm focusing on short story submissions and novel completions. Yes, plural. Lots of beginnings, too many ideas, not enough focus.
View all posts by Mary Fran Says →
This entry was posted in Uncategorized and tagged Mary Lamphere, Miskey Lamphere, Puppies are for sale--contact Mary for details, PUPPIES ARE FUN!, Thanks to Carol Gorman for the dinner delivery!, Thanks to Kelly Joy for the Puppy card. Bookmark the permalink.