The Last of the OCC

This is not the blog I had planned on writing today.
I was in Philadelphia last week for the Indie Author Conference and have MUCH to share regarding the speakers, sessions, and overall experience. Plus, Philly is fantastic!

But then…
My dog died. 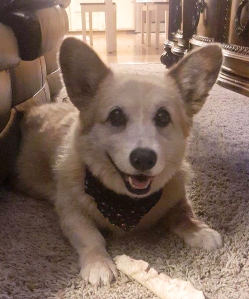 Ozzie was the third Corgi we adopted. I’ll admit it, he was an impulse buy. We already had two. Who needs THREE dogs? We did.

He was fluffy and fast, he preferred people to pets, and he was kind of…special. Remember how Phoebe ran in the aptly named Friends episode, “The One Where Phoebe Runs“? Yeah, that was Ozzie. No grace. Limbs a’flyin. Had to be first. He ran free and floppy. I always wanted to attach my Fitbit to his collar to see how much farther he ran. The track might be a mile and a half, but that dog ran for MILES.

We lost Nellie first, then Buehrle a year ago, and alas, now Ozzie. The last of the Original Corgi Crew.

When I first saw him, I wanted him. Had to have him. I texted Dave and said if he didn’t call me and say no, I was getting him. Dave didn’t. I did.

The pup had a 5 0’clock shadow and he talked. A lot. And no one really knew what he was saying. So, of course, we named him Ozzie, after Ozzie Guillen, the World Series winning White Sox Manager.

Ozzie was here to welcome the members of Corgi Crew Two, Miskey and Jackson.

He got to show them the ropes, teach them the rules, and maybe, just maybe, last a little longer due to the influence of their youth and vitality.

His health had been declining for a couple of months now. His back legs losing strength. He couldn’t walk with the others any more. His days of being fast and first were long gone. We took him to the parks and forest preserves. He didn’t get far, but he tried. He still had a light in his eyes. His body was betraying him, but I think my goofy dog was happy.

He dragged his failing hindquarters all over. To where the other dogs were, to lay in the sun on the patio, to get that damn treat. Anything for a treat. And every pet-owners most appreciated effort–outside to go to the bathroom. He did it until he couldn’t any more.

We spent his last day together. I could tell he was struggling. I cried when he refused the treat. A mother knows.

We had planned to take him in first thing the next morning. No more suffering. He passed before dawn.

It never gets easier to lose a pet. A part of the family for over a decade. My friend. On some days, my favorite.

None of the others shed quite like Ozzie did. I’d like to say I won’t miss the bi-monthly blow-out, CORGI FUR EVERYWHERE, but I think I’ll be finding Ozzie tufts for a very long time. Fluffy reminders of my faithful furball.

I believe the OCC is now reunited. He’s doing laps on healthy legs with Nellie and Buehrle. His ears are flapping, his tongue is lolling, and most importantly, he’s first again. 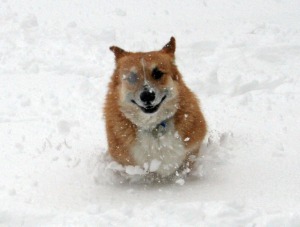 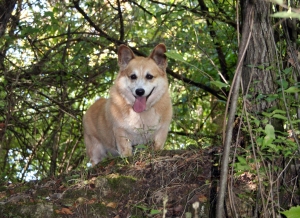 I am an artist, crafter, designer and writer. I enjoy working with mixed media-- applying visual and tactile manipulations to telling a story. Not a lot of market for that, though, :), so I'm focusing on short story submissions and novel completions. Yes, plural. Lots of beginnings, too many ideas, not enough focus.
View all posts by Mary Fran Says →
This entry was posted in It's all about me and tagged Chicago White Sox, Friends episode where Phoebe runs, Mary Lamphere, Ozzie, Ozzie Guillen, The Last of the Original Corgi Crew. Bookmark the permalink.

8 Responses to The Last of the OCC