Posted on January 15, 2018 by Mary Fran Says
In honor of this SNOW DAY, I’m unpacking a blog I wrote in July, but for some reason, never posted. Enjoy.

Me and 25,000 of my closest Pink fans showed up at Milwaukee Summerfest Sunday, July 2, 2017. Despite rain, eight buck beers, and exorbitant ticket prices, the Marcus Amphitheater was packed—SOLD OUT.
No surprise, I mean, it was Pink!

I’m too old for this shit.

I do not enjoy the crush of twenty-five thousand fans—getting in, waiting for the bathroom or to buy a beer, and getting out. I do not appreciate the expense of $100 mid-level tickets with an additional twenty bucks in “convenience fees”. I think it sucks when the tall guy in front of me forces me to watch most of the show on the big screens.

But the energy! The excitement! The enthusiasm! It’s contagious! The physical vibration of twenty-five thousand excited fans—WOW.

They need to figure out a way to harness that. Folks in Milwaukee, and probably surrounding areas as well, could light their houses and run their a/c on that kind of energy. This month’s utility bill coverage brought to you by P!NK. 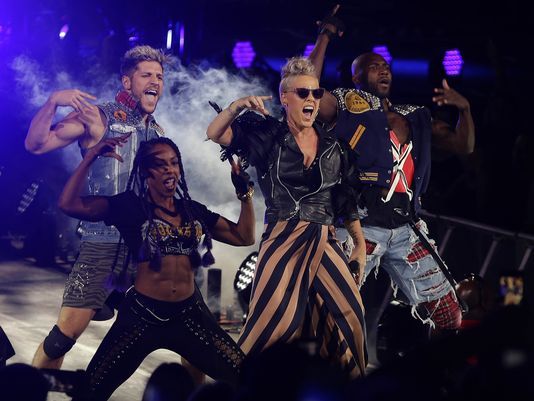 Confession time. I loved the show. Pink is an amazingly talented performer. She was personable, physical, accommodating, and gracious. And damn she can sing. I do realize that the types of venues I prefer–Park West, Lincoln Hall, Thalia Hall, The House Cafe, Otto’s (RIP), could never support the kinds of stage setting, video screens, or harness swings that acts like Pink provide.

And the stage setting, video screens, and harness swing were pretty damn cool.

For a once in a while event, it was totally worth the commute, the expense, and the crowd.
I got to spend the day with a group of wildly entertaining women. Folks who do this on a regular basis and were kind enough to extend an invitation to this small venue gal. Thank you!

In your shorts and tank top with an 8 buck icy cold beer.

I am an artist, crafter, designer and writer. I enjoy working with mixed media-- applying visual and tactile manipulations to telling a story. Not a lot of market for that, though, :), so I'm focusing on short story submissions and novel completions. Yes, plural. Lots of beginnings, too many ideas, not enough focus.
View all posts by Mary Fran Says →
This entry was posted in Uncategorized and tagged Mary Lamphere, P!NK, Pink at Milwaukee Summerfest, THINK SUMMER. Bookmark the permalink.