When we first moved to DeKalb, the toll was forty cents. That was eighty cents a day for Dave to get to and from work in Aurora. Eighty cents, as in cash money. Change. Coins. There was no I-Pass.

Dave was always collecting change in his car for that pesky toll.

When we got the I-Pass, he continued to collect his change. The first time he turned in a box of coins, he got about $64. We were pretty excited.

Can I just mention that it was a cereal box? Lucky Charms, I think. That Dave, I tell ya’.
Poor cereal box had definitely seen better days. The bank lady offered us an official canvas coin bag which we still use.

We continue to collect our coins. It’s nice to be able to. The days of couch diving and floor scrounging in search of milk money, literally, are (hopefully) passed.

Whenever we turn in our change, it seems that no matter how diligent I try to be, they always bring back the empty bag with a paper clip, Canadian coin or two, and some other miscellaneous non-monetary treasure. Topping it off with a bank note to validate our saving prowess.

We recently turned in a bag of change that we’d been collecting for over two years. We kept the bank sack in the end table drawer. It got to the point where you could barely open the drawer it was so heavy.

I kept threatening to run away on the money, but I couldn’t lift the bag.
*Note to self, work on upper body strength.

Dave carried it into the bank and we waited while the machine did it’s counting job. How much do you think? I dunno, how much do you think? The teller was so impressed, she made us guess. Our first guesses were very wrong. Too low. My next guess was over, by about eight dollars. That’s only 32 quarters. Pocket change.

Not exactly a mortgage payment, but pretty impressive for MaD money.
We deposited it, which is, I know, rather anti-climactic, but still, that’s pretty cool.

Of course, I’m saving change again– I sound like an old man jingling my pockets until I can get home to the bag. The drawer is very easy to open now. Almost drew it right off the tracks. I feel like the Hulk.

I think the next full bag needs a purpose. Now that I know that kind of saving is within our reach, I’d like to give it a goal.
I’m open to suggestions. We have at least two years to decide. 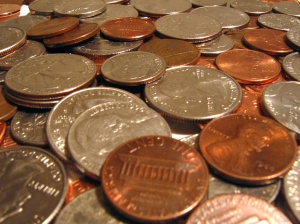 I am an artist, crafter, designer and writer. I enjoy working with mixed media-- applying visual and tactile manipulations to telling a story. Not a lot of market for that, though, :), so I'm focusing on short story submissions and novel completions. Yes, plural. Lots of beginnings, too many ideas, not enough focus.
View all posts by Mary Fran Says →
This entry was posted in It's all about me and tagged Change is good, Lucky Charms bank box, Mary Lamphere, SIX HUNDRED DOLLARS. Bookmark the permalink.

2 Responses to Change is Good