Once upon a time, there were only three, maybe four, television stations. And in the summer, between May Sweeps and September new season kick-off, they only showed live sports or reruns.

But now, now we have thousands of viewing options. They even have SUMMER SEASON SHOWS! Programming targeted for those not playing outside. Which is most of us. C’mon, be honest, we spend more time staring at a screen of one sort or another than we do risking sun exposure.

And that’s okay…
The screen staring, I mean. There are some thoroughly enjoyable summer season shows.

Sense8. Wow, what a hot mess of everything and yet I have no idea how these multiple character strands will converge into a coherent story. Every episode I watch, I wonder why I am watching and yet, I can’t not watch. The description says, “A group of people around the world are suddenly linked mentally, and must find a way to survive being hunted by those who see them as a threat to the world’s order.” Halfway through the first season, we’re still figuring out the linking part, haven’t really gotten to the world’s order thing yet.
The characters are deep. Interesting. They are both very good and very bad. And there’s a lot of, ahem, intimacy. Available on NetFlix.

Wayward Pines. This shows tagline could have been WTH? A short run, 10 episode season, Wayward Pines hooked me immediately, kept me interested, and successfully ended its run with a plausible twist. It kept me guessing. It kept me hesitant (I’ve been burned before. Hello, LOST, anyone? Purgatory, psssh.) It kept me wondering if they would successfully end after one season as promised. (Hello, The Dome? Everyone on the writer’s staff must be high.) That said, I will miss it. But I’m still glad it’s done. (And yes, I do realize that because it was well-received there’s a very good chance it will be back.)

Dark Matter. Six people wake on a spaceship with no recollection of who they are. It’s kind of like an amnesiac Firefly, and not just because there is a Jayne character. (You know, until right this minute, I thought it was Jane and I thought it was his last name!) Dark Matter has proven to be an interesting sci-fi investment of my time. Until they reboot Star Trek again. I do think it’s a lame title, though. Is dark matter supposed to be their brains? Missing memories? Matter unseen? Or outer space? Who cares? It’s forgettable either way. Luckily the show is better than the title. 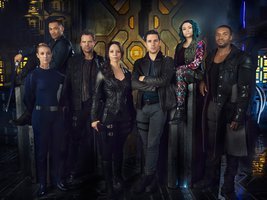 Jonathan Strange and Mr. Norrell. We read the book and were curious about the show. It’s interesting in an unlike anything else we watch kind of way. It’s about two magicians in war time England, one a great study, the other a novice natural. The spells and repercussions are fascinating. As are the historical aspects. It’s filmed in kind of a dreamy subtle way which is both engaging and a little creepy.

The Last Ship. This one surprises me as a summer season series. It’s a real network kind of show. We watched the first season and wondered how they would continue since a) they were proven NOT to be “the last ship” and b) they found a cure! But this seasons subplot of “immunes” who believe they are the chosen ones is fabulous! I can’t wait to see how this cult versus cure storyline plays out. 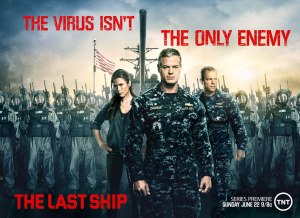 There you go, five summer series worth a watch. That’s pretty impressive when you consider summer is short and there’s no guarantee that in full swing of network programming you’d find five shows worth watching.

What are you watching? I’d love to know if you’re watching any of the five I listed– and what you think of the shows. Now, I’m stepping outside for a while. It is summer, after all.

I am an artist, crafter, designer and writer. I enjoy working with mixed media-- applying visual and tactile manipulations to telling a story. Not a lot of market for that, though, :), so I'm focusing on short story submissions and novel completions. Yes, plural. Lots of beginnings, too many ideas, not enough focus.
View all posts by Mary Fran Says →
This entry was posted in Uncategorized and tagged Dark Matter the tv show, Jonathan Strange and Mr. Norrell, Mary Lamphere, Sense8, Summer season television, The Last Ship, Wayward Pines. Bookmark the permalink.