It is officially that time of year when I begin thinking in “and thens.”

It’s Monday, so I have to blog, and then make my shopping list for Thanksgiving supplies and then shop, and then unload the holiday decorations, and then clean and then decorate and then bake, and then, and then…
Did I mention it’s NaNo?
And that my online writing class began?
And the Lamphere’s ad is due?

These next two weeks are especially crazy-busy. In addition to the previously listed and-thens, I have two upcoming dates in Chicago (an evening with Michael Connelly, http://www.eventbrite.com/event/4526647324#, and then the Jane Addams award luncheon, and then the Chicago Literary Hall of Fame induction http://www.chicagoliteraryhof.org/).
I’m not complaining, or bragging, as much as looking for company in my busery.
(Do you like that? Not “misery,” but busy-ery!)

There’s nothing like impending company to open your eyes to the trim you never finished painting, or the grime around the doorknobs and switch plates. That sock in the middle of the floor that you’ve stepped over for days now without thought. The cobwebs in the corner and the dust, oh the dust! But I can’t dust now. I still have other cleaning, unpacking, shopping, and then cooking to do.

Thankfully, there is an innate hierarchy to the and-thens. I really can’t cook until I shop, can’t shop until I make the list, can’t make the list till I go over the recipes. And I can’t check the recipes till I finish this blog. So that’s what I shall do first.
Not the season, not the month, not the week, not the day or even the hour…
I will focus on the top of the and-then pile.
There’s a great view from up here. I can see for miles of moments.

So, allow me to alter the title of this blog to: ‘Tis the Moment. 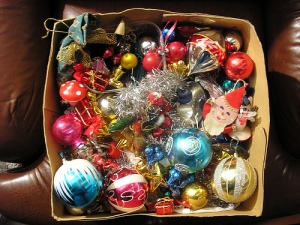 I am an artist, crafter, designer and writer. I enjoy working with mixed media-- applying visual and tactile manipulations to telling a story. Not a lot of market for that, though, :), so I'm focusing on short story submissions and novel completions. Yes, plural. Lots of beginnings, too many ideas, not enough focus.
View all posts by Mary Fran Says →
This entry was posted in Holidaze and tagged and then, Busy, christmas, holidays, Thanksgiving. Bookmark the permalink.