Even before I was focusing on being a writer, I was a list-maker, ever armed with scrap paper and a pen.

I’m not as efficient with the list-making now-a-days, and it shows, but one list sticks with me.
When I travel, I always compose a “weird” list.

Having just returned from eight days on the road, the “weird” list is fresh in my mind and I’d like to share.
The only qualification is the observation must be followed with, “Whoa- that was weird.”

* Barely two hours into the trip, my husband asks me which member of the Village people our son would be. (Whoa- that was weird! And cracked me up! As you may guess, my husband makes this list frequently.) Colorful conversation ensued.
We then tried to come up with a female version of the Village People. The Spice Girls was a close as we could get. My husband successfully named all five and added, “Whoa, I know my Spice Girls.”

* We passed two port-a-potties alongside the highway. Not a construction zone, just two cans stationed between the gully and the cornfield. (When we passed the group of bright orange vested and capped convicts, it made sense, but our first reaction was, whoa-that was weird.)

* I knew Illinois needed rain, but driving cross-country, it was obvious that we are not the only ones suffering from a drought. At one point we passed a stunted corn field. My husband’s conclusion? “If we’re knee-high by the 4th of July, these guys must be knee-high by August 9th.” Okay, so maybe it’s just Dave that’s weird.

* We stopped for dinner in a small town called Weedsport. The first restaurant we tried had a large, hand-written sign on the door, “Kitchen closed—chef accident.” A guy on the street told us the chef had fallen through the stairs and broken his back. Of course we reacted to the news with concern, but the man assured us it was okay. It wasn’t the kitchen stairs, he did it at home.
(He then directed us to “O’Leary’s on down the street.” It was Old Eerie Inn down the street.)

* I often take photos of bicycles. Some of the inner city bikes have quite a personality, tell quite a story. This was the first time I’ve taken a picture of just a seat. A seat chained to a tree. That  had to be an uncomfortable ride home! And kind of weird.

* We saw a kid swimming in a fountain. In a suit. With goggles. (I wondered how many big “wishes” he was collecting.)

* We kept seeing the same sign as we drove the thruway; finally my husband asks me, “Who is Eric Canalway?” Or Erie Canal Way. We later came across his cousin, Eric Canalharbor.

* We took a ferry to Georges Island. As we were wandering, we crossed paths with a family who had planned to be there for the day, complete with grilling supplies—and guinea pigs. Wait, that reads wrong. They had charcoal and hot dogs for the grill. And two guinea pigs, that had obviously accompanied them on the boat, and were just hanging out on the sidewalk.

* We saw a young girl walking her cat. A collar and a leash, just a casual stroll through the park.

* We had trouble loading our Charlie card for the Boston T train. It seems, according to the less than helpful assistant, that “There’s no swiping in Boston.”

* In all of my decades of Aquarium visits, I had never before seen a Sea Dragon. Very. Cool. (And oh yeah, totally weird!)

* Our hotel in Buffalo was hosting the annual Salt and Pepper Shaker Convention. Shaker fans come in all shapes, sizes and equally of both sexes. They carry their shoe boxes of shakers like newborns.

* We passed a semi with the words, “Trojan Horse Delivery” on it. Accept no deliveries from this company!

* Everyone makes fun of Dunkin Donuts in Massachusetts. They are an easy mark—they are EVERYWHERE. One lady told us that “DD owns Mass.”

* We bought a $3.50 cannoli from an Italian bakery. It was peanutbutter flavored and weighed at least three pounds.

* I am a keepsake kind of gal. Receipts, tickets, souvenirs… this list. The past few trips have ended conveniently in an orderly manner with a metal lunch box to hold all of my vacation collections. Five states and many shops and nary a lunch box to be found! This may not surprise you, but trust me, whoa- that is weird!

You know there’s more—eight days’ worth of goofy observation. I realize this list is personal—and chock full of “had to be there,” but I hope you enjoyed it.
It’s the little things in life that make it memorable. The little weird things.
I hope you’ll notice the weird on your next trek.

A side note: Many years ago when we first drove out East, the fact that our I-Pass worked in New York made the “weird” list! Now we know it’s just a mighty fine convenience.

POST SCRIPT: Dave says, “Cool, your blog got you a lunch box.” Yes! I received a lunch box for my Boston souvenirs from a friend who read this blog. Thanks, Mike!
I have to admit, it was pretty weird to get a lunch box in the mail. But very, very cool. 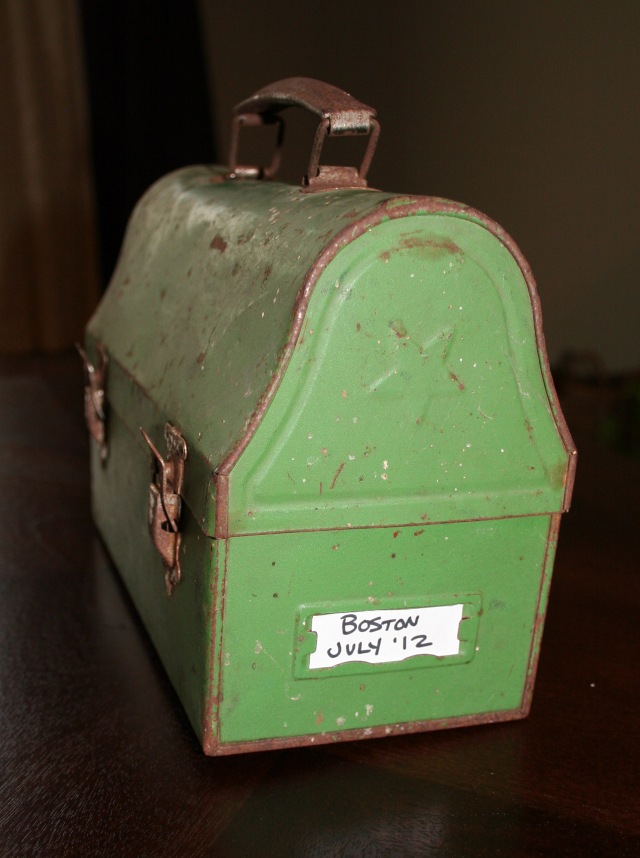 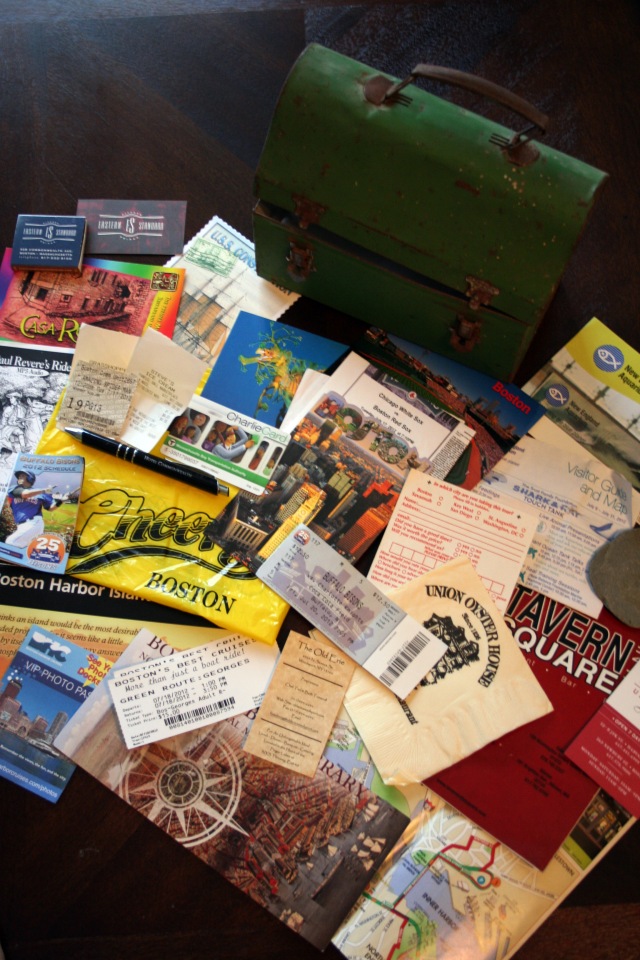 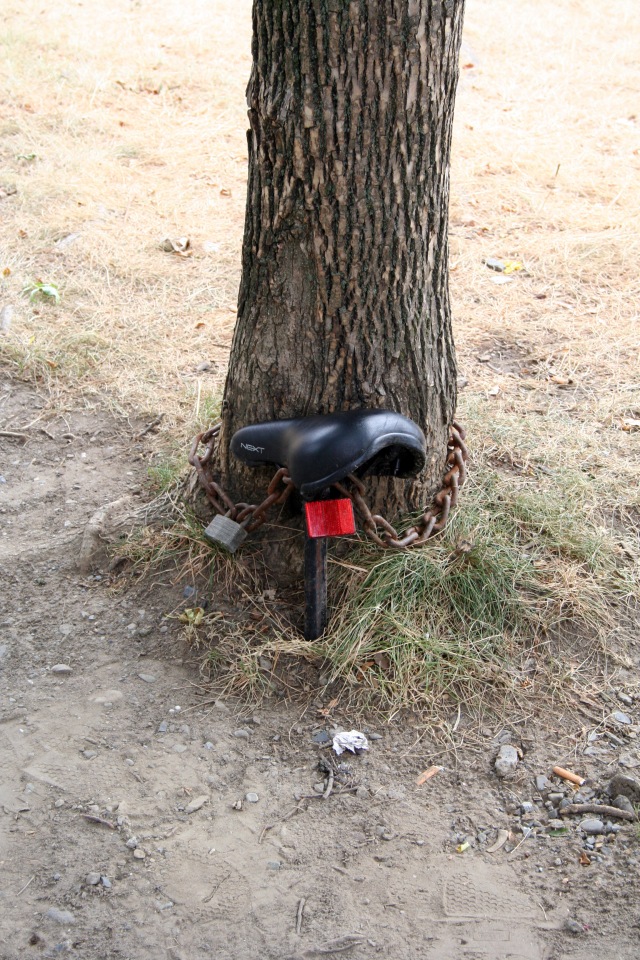 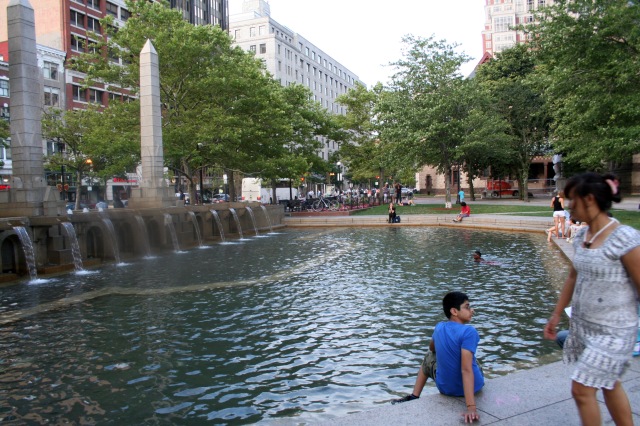 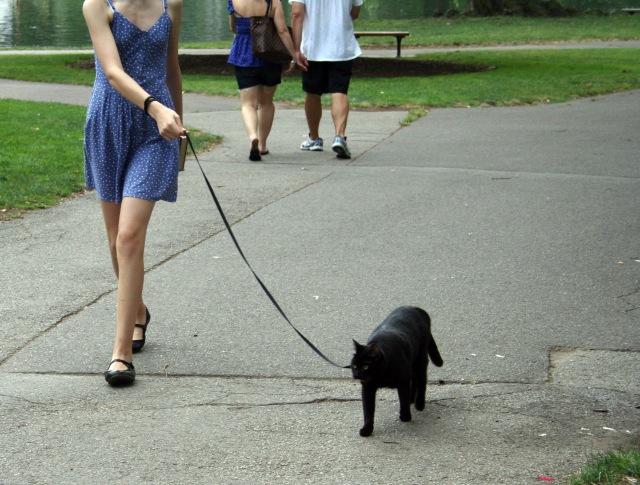 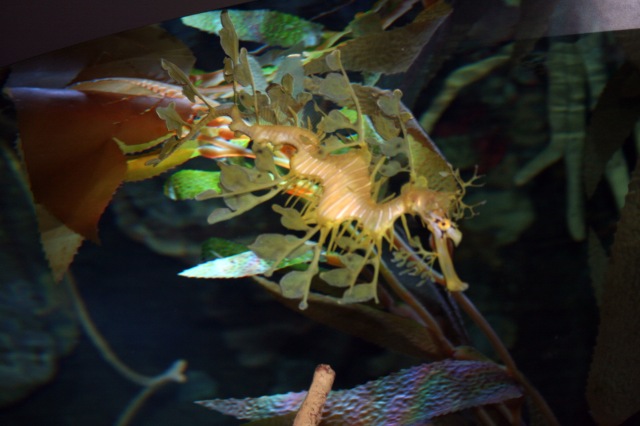 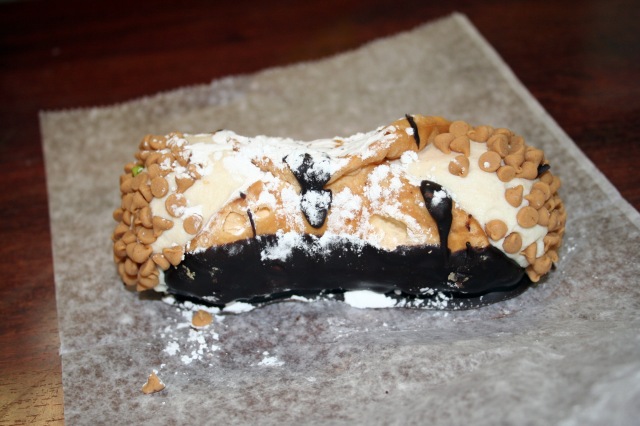 I am an artist, crafter, designer and writer. I enjoy working with mixed media-- applying visual and tactile manipulations to telling a story. Not a lot of market for that, though, :), so I'm focusing on short story submissions and novel completions. Yes, plural. Lots of beginnings, too many ideas, not enough focus.
View all posts by Mary Fran Says →
This entry was posted in My Travels and tagged bike seat, cannoli, cat on a leash, list, sea dragon, weird. Bookmark the permalink.